The Waterford woman who put Ireland on the international fashion map

Fashion designer Sybil Connolly dressed some of the world’s most glamorous women from Jackie Kennedy to Elizabeth Taylor.

Since 1991, March has been designated Irish-American Heritage Month in the United States. The contributions and achievements of Irish immigrants and their descendants are commemorated and celebrated at events across the nation. However, not every Irish person who helped to shape American culture necessarily lived there. The transnational ties established by our emigrant communities could often be leveraged for economic advantage from all around the world…

One individual who benefitted from these networks was the renowned fashion designer, Sybil Connolly. Born in Wales to an Irish father, she spent her formative years there before moving to Waterford following his death in 1936. From an early age she showed a keen interest in fashion and was allowed to leave school at the age of 17 and move to London. There she began an apprenticeship as a dressmaker at Bradley’s, a prestigious Irish firm who counted the widowed Queen Mary among their clients. The young Irish girl would often attend royal fittings at Buckingham Palace where she remarked her role was chiefly to “hold the pins”.

The outbreak of the second World War saw Connolly return to Ireland once again where she secured a role as a buyer with the Richard Alan fashion house. She later took on the role of manager and, following the departure of Gaston Mallet, the company’s chief designer in 1952, soon filled that vacancy.

Connolly was determined to keep up with the latest international trends but to add a distinctly Irish twist to her designs. She incorporated Irish fabrics wherever possible. These included

Connolly owed her big break to her relationship with the Irish-born editor of Harper’s Bazaar, Carmel Snow. Snow led a delegation of American fashion designers and department store buyers on a visit to Ireland in 1953. In Ireland they had the opportunity to view an exhibition of Connolly’s work at Dunsany Castle. A few months later a full-length red Kinsale cape and white crochet evening dress she designed appeared on the cover of Life magazine under the title “Irish invade fashion world”. This catapulted Connolly to become a well-known name among the elite of American high society.

Soon after Connolly launched her own label. Her work would appear in Time, Harper’s Bazaar and Vogue magazines. She counted Hollywood stars like Merle Oberon, Rosalind Russell, Elizabeth Taylor, and Julie Andrews among her clientele alongside several members of the wealthy Rockefeller, Mellon, and Dupont families. Her talent for self-promotion and her personal business acumen served her well and enabled her to open up new markets across the United States, Canada and even Australia. Stores that had never stocked the work of Irish designers previously were soon selling her work.

At the peak of her success Connolly earned over $500,000 a year in gross sales and directly employed more than 100 women as weavers and lace-makers. Considering this period was one of the most economically turbulent decades in Irish history, Connolly’s story is even more incredible. She was able to undercut a number of her continental rivals thanks to the lower wages her Irish workers expected. However, high fashion can often be a fickle mistress. Demands for more youthful and contemporary designs saw her sales rapidly decline from the 1960s onwards.

First Lady Jacqueline Kennedy was a fan of Connolly’s work. Her official portrait, which was unveiled in the East Room of the White House in 1971, depicts her wearing a pleated linen dress made by the Irish designer. 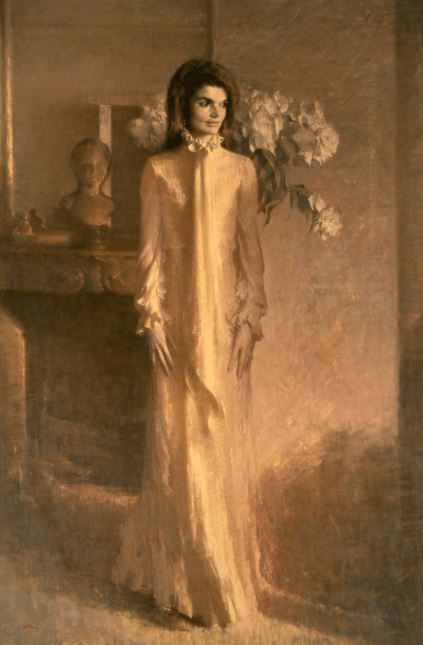 In later life she turned her hand to interior design and homeware. Her collaborations include Tipperary Crystal, Tiffany & Co., and Brunschwig & Fils among others.

Connolly was heralded as the first great Irish designer both throughout her life and thereafter. The international acclaim her work attracted helped to establish a number of key international markets that her successors would benefit from. In 1960 American Vogue magazine editor Bettina Ballard wrote of her: “Ireland was a completely unexpected center for fashion. We were drawn en masse to Dublin by the personable milk skinned Irish charmer – Sybil Connolly.”

Connolly died in 1998 but an excellent collection of her work can be viewed at the Hunt Museum in Limerick. Tipperary’s Swiss Cottage also benefited immensely from her contributions to its internal refurbishment during the 1980s. She left her mark on Ireland and a distinctly Irish mark on the global fashion industry.

This Extraordinary Emigrants article, in association with the Irish Times Abroad, was written by Nathan Mannion, senior curator of EPIC The Irish Emigration Museum in Dublin’s Docklands. Article was reformattedon 21/07/2022.