From the Irish countryside to the American South: Traveller Emigration to the US

Irish Travellers are well known for moving around Ireland and the rest of the British Isles. But, over the years, they’ve also ventured further afield. From the early 1800s on, they began to arrive in the US and became a particularly prominent community in the American South.

Although the full story of the Traveller diaspora isn’t clear and there are few sources written by its own community members, here’s what we know about their arrival in the US.

Members of the Traveller community left Ireland for some of the same reasons as other Irish emigrants. Many left during the Great Famine in the 19th century, while others left during subsequent economic downturns.

But, over the years, Travellers had their own unique reasons to emigrate too. For example, to avoid discrimination and forced settlement.

During a lecture hosted by EPIC The Irish Emigration Museum, sociologist and human rights activist Dr. Sindy Joyce explored some of these reasons:

Some emigration to the US was even forced. As Ian Hancock, director of Romani Studies at the University of Texas, noted in 1986: “From Cromwell’s time on, large numbers of British Travellers, including the Irish Travellers, were transported to the Americas.”

However, the largest period of migration to the US appears to have taken place in the mid-19th century, as a result of the Great Famine.

Where did they go?

According to a 1971 journal by Jared Harper and Charles Hudson, Irish Travellers first settled in Tonawanda, New York; Pittsburgh and Germantown, Pennsylvania; and Washington, D.C. This information, the journal says, comes from the Travellers’ own oral history.

The work of Frederick S. Arnold, an American folklorist, offers an insight into just how widespread the Irish Traveller community in the US was. In 1898, he visited a camp outside New York where a man called Lackey Costello offered to teach him some Cant – the language of Irish Travellers.

Arnold stayed at the camp for a couple of days. After this, he sought out other Irish Travellers to speak Cant with. He found them throughout the states of Connecticut, Massachussetts and New York.

Many of the first Travellers to arrive in the US in the 1800s moved South – particularly after the American Civil War. Later arrivals mainly lived in the North. The former are known as Sawries, while the latter are called Greenhorns, according to Hancock.

In the South, Irish Travellers became well-known as horse and mule traders.

Establishing communities in the South

During the Great Depression, the US government funded the Federal Writers’ Project which created travel guides for each state. The guides for Atlanta and Tennessee both mention Irish Travellers and their history there.

According to ‘Atlanta, a city of the modern South’, the roots of many southern Travellers can be traced back to families that initially emigrated to Washington and established a livery stable there. These were the Rileys, the McNamaras, the Carrolls, the Sherlocks, the Garmons, the Costellos, the Dartys and the O’Haras.

As time passed, they began to travel the country in their wagons and found further opportunities down south.

One group, led by a man called Pat O’Hara, established a base in Nashville, Tennessee. Then they moved on and settled in Atlanta, Georgia. Here, some Travellers purchased land but most of them eventually returned to the road.

However, in 1881, when a leading Traveller called John McNamara was buried in Atlanta’s Oakland Cemetery, the community established a strong tie with the city. So it became a tradition to have funeral masses in the Gothic, red brick Church of the Immaculate Conception once a year. 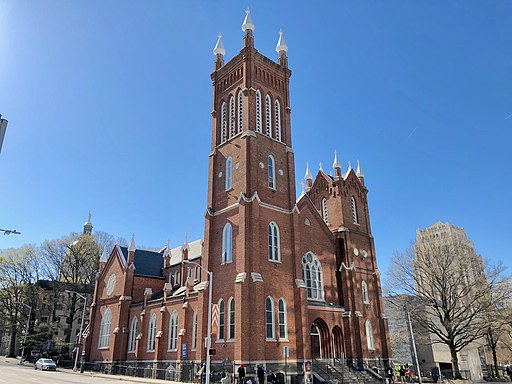 Here, the scattered community came together to hold funerals, weddings and business meetings every April. The Atlanta guidebook notes “the vigorous beauty of black-haired, blue-eyed Irish girls in the finery of bright dresses and costume jewelry”, while it labels the men as “good American citizens” because they enlisted during times of war.

At some point, it was decided to have annual reunions in Nashville, Tennessee, too. During the last week of April, Travellers who were based west of the Allegheny Mountains would set up camp here. Those to the east continued to gather in Atlanta.

In the 1940s, when the Tennessee guidebook was written, around 3,000 Travellers set up their green tents and trailers in a field below an underpass. In the local Mount Calvary Cemetery, visitors can still see elaborately adorned graves bearing Traveller names like Gorman and Sherlock.

Throughout the 1800s, animal trading proved to be a successful business for Travellers in the South. As Harper and Hudson explain, some got jobs in large stock centres, while others drove animals out into the countryside to trade with farmers. Occasionally, they would open a shop and trade from there.

According to the Tennessee State guide, written in 1949, Irish Travellers bought many fine animals. But they were also known to take on sick mules and overworked horses, which often recovered under their care. Some families shared depots in cities like New Orleans and Atlanta where they could store their animals before selling them at auction.

The guide says they traded animals abroad too. In fact, it claims that “much of the mountain artillery of the Italian Army was carried into the hills of Ethiopia on the backs of mules bought for the Italian Government by the Irish Nomads.”

While it is difficult to confirm this assertion, Harper and Hudson note that the Travellers enjoyed a boom in mule trading during World War II. A newspaper article published in the Las Vegas Age on December 3rd, 1943, also gives some credence to the claim.

It reads: “In 1935, before Mussolini invaded Ethiopia, he practically denuded Missouri, Arkansas, and Texas of mules. The Italian government bought about 300,000.”

While the Irish Traveller community flourished in the US South, members weren’t always welcomed with open arms. In 1927, the state of Georgia introduced an anti-Traveller tax. It placed a $250 levy on each group of “horse-traders” or “gypsies”, who lived in tents or travelled in covered wagons and automobiles.

Irish Travellers in the South today

Despite the discrimination faced by some Travellers, the community still has a strong presence in the American South.

Murphy Village in South Carolina is probably the best-known community today. Located just a couple hours from Atlanta, it is home to around 2,000 Travellers of Irish descent. According to locals, the town is named after Fr. Joseph Murphy – a Catholic priest who convinced them to settle near his church back in the 1960s.

Today, roughly 10,000 people in the US identify as Irish Travellers. This is a significant figure considering the population in Ireland stands at around 30,000. However, because the US census doesn’t record Irish Traveller ethnicity, the true number remains unclear.